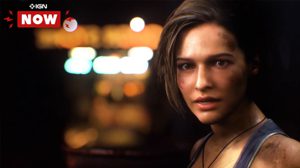 The producers say there will be more rearranged elements in the Resident Evil 3 remake than there were in the Resident Evil 2 remake. This may include some differences to how the story plays out. One big push from Capcom is to make the cast stand out more so that you care about them. As part of this, Dario Rosso plays a much larger role in the game. In the original, he's a civilian who appears at the beginning of the game who gives Jill shelter in an abandoned warehouse. He's found by himself after losing his family somewhere in Raccoon City.